at the Royal Beach Hotel

Paul-Ronney Angel & Tomirae Brown - Seven Spanish Angels
New single out 27 November 2020 (DL/CD/Video)
Paul-Ronney Angel is the singer and songwriter for London’s The Urban Voodoo Machine since 2003 - he released his debut solo single One Ghost Town in July.
Tomirae Brown is the widow of the Godfather of Soul, Mr James Brown as well as his touring partner and lead backing vocalist for over a decade right up to his untimely death in 2006.
Since they first met in 2015, Paul-Ronney Angel and Tomirae Brown has done several live performances together, including the Vive Le Rock Awards.
It’s only now due to COVID-19 restrictions that Mr. Angel (the leader of a nine-piece band) along with Mrs. Brown (who is about to launch her seven-piece band) have decided to release a single together.
Mr Angel: With all touring being off and it not being possible to gather in large groups, the time was perfect to do this. We recorded with Alex McGowan at London's Space Eko Studio where we had both worked with our bands.
Seven Spanish Angels was originally a duet by Ray Charles & Wille Nelson and this dynamic duo takes this great song into the unpredictable future of these strange times.
Mr Angel: 'It’s been great working with Tomirae on this song - she’s got such an amazing voice and a whole lotta stories to go with it!! I can’t wait to collaborate on some original material soon!
Mrs. Brown: “I couldn’t help but think by the time we wrapped the shoot that P-R Angel was actually the first of the Seven Angels! I can’t wait to write and perform again with him in the future. I believe we’re up to a grand start with this timeless classic!'
Paul-Ronney Angel has a new album in the can with his band The Urban Voodoo Machine called Snake Oil Engine that features Tomirae Brown as well as her 19-year-old son James Brown 2 that will be released as soon as they will be able to tour.
Tomirae Brown has lived in the UK for the last 5 years and was about to launch her solo carrier just as lockdown happened. Her debut solo album entitled Strong is very much ready to go as soon as she can hit the road with her new band! 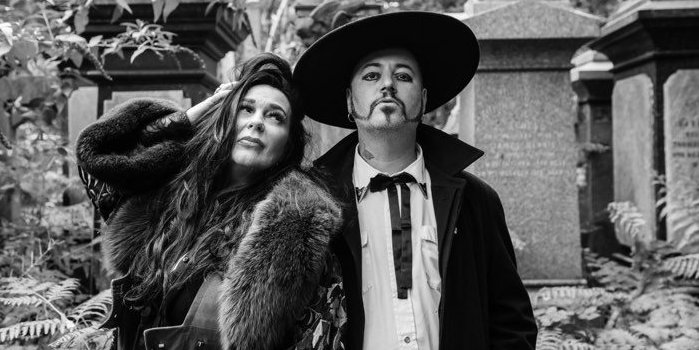